Taking A Closer Look At The Slur Of Being Called Islamophobic

Just out of curiosity I decided to look up a couple of definitions.
First, lets start with the root word of the term Islamophobia, the word phobia.

Merriam-Webster defines a phobia as "an extremely strong dislike or fear of someone or something".

OK, moving on, lets see the definition of the word Islam from the same source :" the religion which teaches that there is only one God and that Muhammad is God's prophet : the religion of Muslims".

So to take this term Islamophobia literally, it means the strong dislike or fear of the religion of Muslims.
There are other ways to take this of course but for this discussion I'm going with this one.

After getting these definitions I Google searched Islamophobia and went directly to that bastion of Liberalism, U.C. Berkeley to get their take on it.

The term "Islamophobia" was first introduced as a concept in a 1991 Runnymede Trust Report and defined as "unfounded hostility towards Muslims, and therefore fear or dislike of all or most Muslims." The term was coined in the context of Muslims in the UK in particular and Europe in general, and formulated based on the more common "xenophobia" framework.

The report pointed to prevailing attitudes that incorporate the following beliefs:

Islam is monolithic and cannot adapt to new realities
Islam does not share common values with other major faiths
Islam as a religion is inferior to the West.
It is archaic, barbaric, and irrational.
Islam is a religion of violence and supports terrorism.
Islam is a violent political ideology.
For the purposes of anchoring the current research and documentation project, we provide the following working definition:

Islamophobia is a contrived fear or prejudice fomented by the existing Eurocentric and Orientalist global power structure. It is directed at a perceived or real Muslim threat through the maintenance and extension of existing disparities in economic, political, social and cultural relations, while rationalizing the necessity to deploy violence as a tool to achieve "civilizational rehab" of the target communities (Muslim or otherwise). Islamophobia reintroduces and reaffirms a global racial structure through which resource distribution disparities are maintained and extended.

Now to dissect this a bit.

"Islamophobia is a contrived fear or prejudice fomented by the existing Eurocentric and Orientalist global power structure."

Don't believe your lying eyes, there is a conspiracy to smear these people by some amorphous group of people in the world who apparently have a lot of power, somewhere over yonder.
We are back to this irrational fear and aversion thing.

I don't know about you, but I believe I have a very rational reason to be averse to things like this, 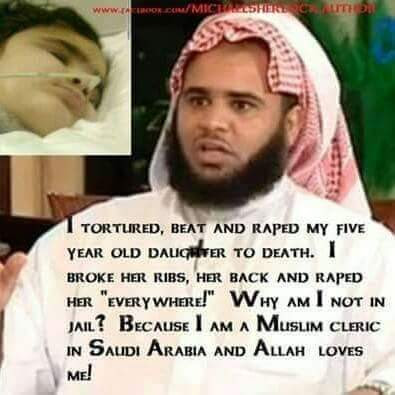 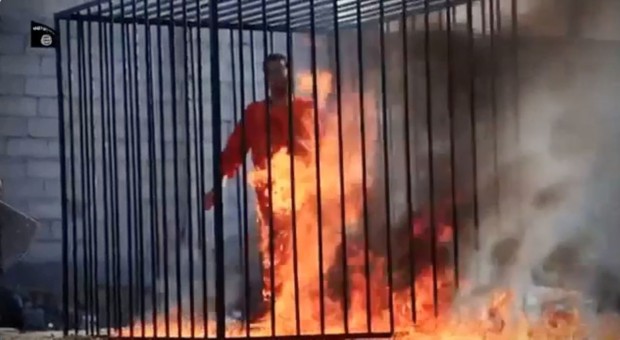 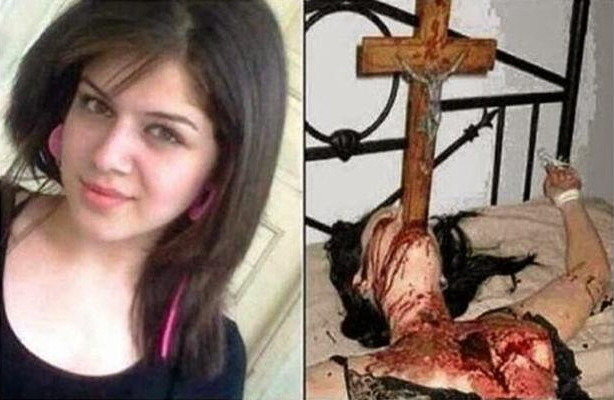 I could go on here for days but I'm quite sure you get what I am trying to say.
Back to the list,


"Islam is monolithic and cannot adapt to new realities".


Devout Islamic Muslims study the Quran and the lesser known to Western Culture, The Sunna.

“The Sunna” in Arabic literally means, “a clear or well trodden path”. It refers to whatever Muhammad said, did, condoned, or condemned. It is the record of Muhammad’s sayings, customs, teachings, or the example that he left for all Muslims to follow. Muslims view Muhammad as being the perfect example for all human beings.

They take the teachings in this literature to heart and follow their directives without question.
The charge of being monolithic and unable or unwilling to adapt to new realities is pretty much undeniable.
Take one hard look at how the adherents to ISIS take these works literally and I think you will agree. 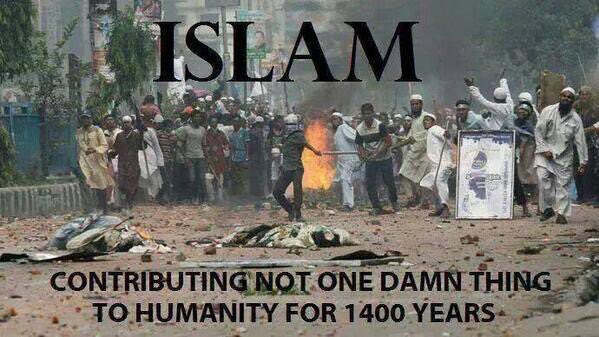 "Islam does not share common values with other major faiths."

Most of the religions I know about don't call for mandatory conversion or death, although there was that whole Inquisition thing. enough said there.

"Islam as a religion is inferior to the West."

Who am I to rate anyone's religion and how does one go about that anyway? 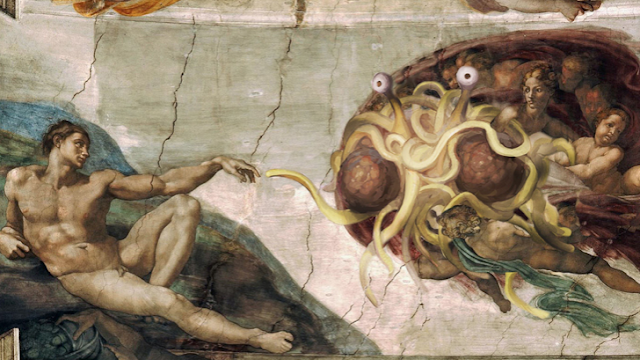 "It is archaic, barbaric, and irrational."


I would have to say that other than the Pastafarian's referenced above, most all religions would have to be considered "archaic".
Buddhism, Christianity, Islam, Judaism, all are pretty much long in the tooth and have been around a while without any real changes to their principles set down at inception.

Most definitely, see the photos above in case you need any reminders.

As for irrational, ask any Atheist and they will tell you all religions are irrational.


"Islam is a religion of violence and supports terrorism."

Take a quick gander at a very short list and make up your own mind. 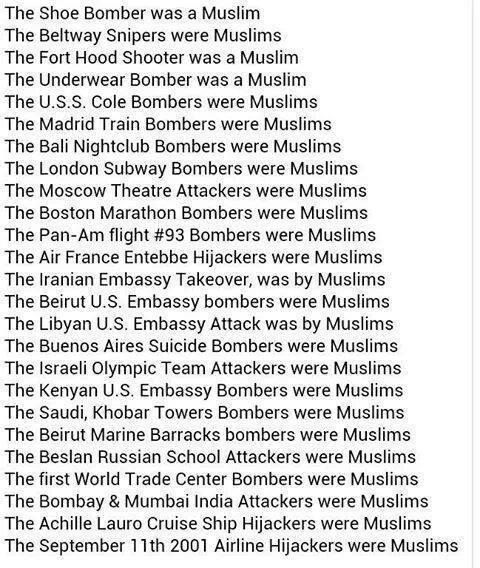 "Islam is a violent political ideology."

The number two search result, right behind a Wikipedea link is this,

Research: Islam really is the world’s most violent religion

Together with a number of research assistants, the Danish linguist Tina Magaard spent three years examining the texts of the ten largest religions. The purpose was to investigate whether any of the religions incite violence.

The conclusion was clear: “The texts of Islam are clearly distinct from the other religions texts as they, to a higher degree, call for violence and aggression against followers of other faiths. There are also direct incitements to terror. … Moreover, in the Qur’an there are hundreds of invitations to fight against people of other faiths.”

The verses are in black and white and without mitigating context. One of the verses that deal with non-Muslims is: “So when you meet those who disbelieve, strike their necks until you have inflicted slaughter upon them.” (Qur’an 47: 4).


In conclusion, after fisking the Islamic apologist dogma and their attempt to slur people who have a very justifiable aversion to the religion of Islam and it's more zealous followers I can answer this question;


Cross posted over at The Vulgar Curmudgeon.

America Is Fallen, Now Is The Time We Hoped Would Never Come

Watch this video and think about what this gentleman is saying to you. Do not just click on by, watch it.

"Our Government is in a state of Treason".

Now is the time fellow Patriots.
Time to start actively throwing wrenches into the gears of Leviathan.

Non violent action until there are no other options.

That will come sooner, rather than later.

H/T Kenny and WRSA for sharing this.

Just 62 People Now Own As Much Wealth As Half The Total Global Population.

Five years ago it took 388 people to make that happen.
In five years, the amount of wealth that has soared to the top 1% of the population has increased dramatically and is showing no signs of slowing down.
To qualify as being part of the richest 1/2 of the total population you only had to make $4400 a year.
To put this into perspective,

these 62 people have more wealth than 3 BILLION people put together.

Sixty-two people have the same amount of wealth as half the world, says Oxfam

Just 62 people own as much wealth as the poorer half of the global population, a new report reveals, as the widening of the gap between the rich and poor accelerates.
As the business elite converge on Davos for the World Economic Forum, an Oxfam report shows wealth is becoming further concentrated, with the number of people owning the same amount as the bottom half of humanity falling from 388 to 62 in five years.
It says a "broken" economic model underpinned by deregulation, privatisation and financial secrecy has seen the wealth of the richest 62 people jump by 44 per cent in five years to $1.76 trillion.

In that time, the wealth of the poorest 3.6 billion people plunged by 41 per cent.

"The big winners in our global economy are those at the top. Our economic system is heavily skewed in their favour. Far from trickling down, income and wealth are instead being sucked upwards at an alarming rate," the report said.


What cannot be sustained won't be.