Because you know, they might get their feelers hurt.
Nevermind that pesky Free Speech thingy you may have heard rumors about in the past.

In Harrisburg, Pennsylvania, earlier this week, lawmakers, police officers and other supporters gathered at the state capitol to celebrate Law Enforcement Appreciation Day. Amid praise for those who wear the badge, state Rep. Dom Costa (D), former chief of the Pittsburgh Police, suggested he would introduce legislation to protect police officers -- not from physical harm, but from getting their feelings hurt by citizens.
Following comments by state Sen. John Rafferty (R), who spoke about criminal targeting of police and encouraged attendees to support his resolution to recognize 2015 as the “Year of the Law Enforcement Officer,” Costa discussed another supposed threat to police.
"This nonsense that is going today on where police officers are being taunted by people and being provoked, let's face it we’re all human beings, and eventually that emotion will break. And that’s what they’re trying to do," he said, according to Raging Chicken Press, seemingly speaking about anyone who would verbally challenge police. "So, what I’ve talked to some of my colleagues and the senator [Senator Rafferty] is that we have a bill about taunting a police dog. It’s illegal. There should be out that you can’t taunt a police officer because you’re going to get those emotions up. [We] are looking at that bill to put it forward in the House, and I am sure the Senate will follow. Or at least support that bill."

At this point in our long slow slide to absolute tyranny I would like to stop for a moment to point to this particular article as the absolute epitome of what is wrong with this country and why we are where we are right now.

We have elected officials who have absolutely no clue of how our government is supposed to work and instead find ever more ridiculous thoughts that they wish to make law.

The real problem here is that they do make them laws, irregardless of their basis in reality or in the context of well thought out long term effects.

Knee jerk feel good legislation that adds yet another layer of regulation or prohibition against what has historically and with legal precedence been perfectly legal for CENTURIES.

Because some podunk cop with no self control might get his or her feelings hurt when you call them a Jack Booted Thug, this clown wants to make that act illegal.

I have one thing to say to Mr.Dom Costa.

You sir, are a menace to a free society.

This is why we have recall petitions available to us to get rid of unqualified jack asses who somehow manage to get into office before they show just how dangerously stupid they are. If recall petitions do not do the trick we do have other means that have worked in the past and may well be coming to a voting district near you very soon. 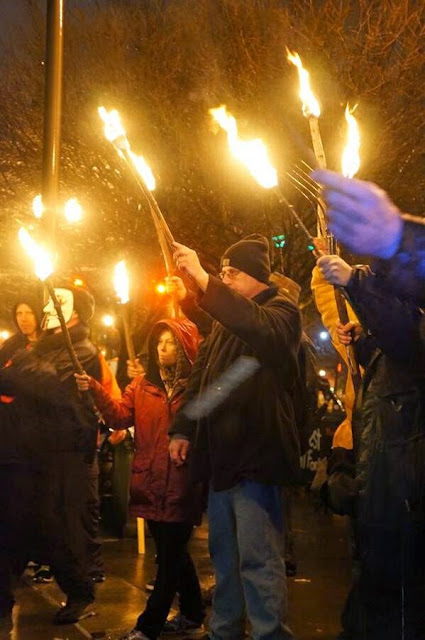 If you somehow managed to reach adult hood without grasping the concept that Free Speech is absolutely guaranteed and sacrosanct in this country then you should have no reasonable expectation to hold the authority to tell anyone to do anything at any time, ever.

Our country is lost to us until we can educate our citizens again and that has been under attack for fifty years now so I am not holding my breath.

A Conversation Who's Time Has Come.

It is actually way overdue.

Read it all and see if you don't find yourself nodding in agreement.


Law Enforcement Organizations are completely out of control in this country and we are in effect, living Without Rule of Law right now.