It's in your DNA America. 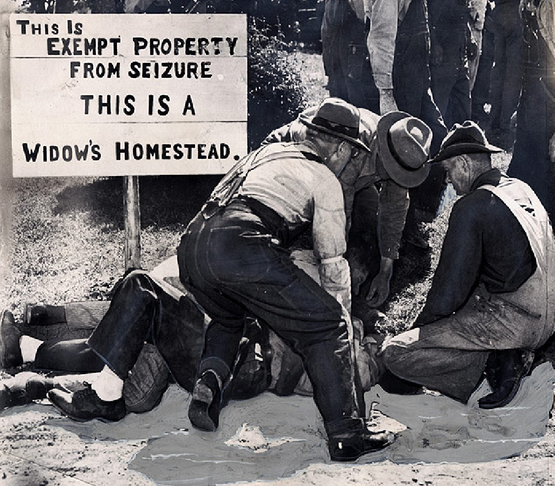 Farmers take down the sheriff who is trying to evict a widow from her farm after the insurance company failed to do so. Near Lapeer, Michigan. June 3, 1952.

Found and copied from HERE. (NSFW) (Time Sink)
Posted by Phil at 8:07 PM No comments:

No word on whether or not they beat the living shit out of him for his trouble.
One can only hope so at this point.

The suspect was loading his automatic Kalashnikov rifle in a toilet when the two Marines confronted him, the source said.

The gunman fired on the Marines with a handgun, the official said, wounding at least one of them. Three people were injured aboard the Thalys train traveling from Amsterdam to Paris, authorities said.

The Marines overpowered the suspect, who was placed under arrest when the train was rerouted to the town of Arras, about 115 miles (185 kilometers) north of Paris. One of the Marines was wounded, the Pentagon said.

The gunman, a Moroccan national, was on the radar screen of European counterterrorism agencies for his radical jihadist views, the official said.

A second security source told CNN the gunman was known by French intelligence. The official said it appeared the gunman was sympathetic to ISIS, but a full determination on his specific loyalties had yet to be reached.

The man had plenty of ammunition, the first official said, and the Marines prevented a massacre.

The attack has not officially been classified as an act of terrorism, although the senior European counterterrorism official indicated it was suspected.


If you own one of the pistols listed below then you will want to be keeping up with this.


Firearms manufacturer Taurus has agreed to a voluntary recall of nearly 1 million pistols as part of the settlement of a lawsuit that alleges nine handgun models had defects, including one that caused some to inadvertently fire when dropped.

"This is not an anti-firearms lawsuit. This is a defective product lawsuit," said Birmingham attorney Todd Wheeles, co-lead counsel representing plaintiffs in the 2013 federal lawsuit. "This hopefully will help save lives by taking defective firearms off the street."

Despite the voluntary recall, Taurus denied in a statement Friday night that there are any design defects in the models.

"Neither the settlement nor the allegations in the case include any of the popular Taurus G2 model pistols," according to the Taurus statement.

Details concerning the nine pistols and how and when to submit a claim will be provided in the near future, according to the Taurus statement. "Claims will be handled by a Third Party Claims Administrator (TPA). Once the Claims Period opens, the Taurus Companies will provide notice through digital and print outlets. All claims should be made through the TPA."