By declaring a State of Emergency even before the Grand Jury decision, Governor Jay Nixon is setting the stage for the National Guard  and all the different Police Agencies to get set up and in position to counter any violent protests they are expecting .

He  is basically preparing for state sanctioned violence before any final decision has been made to send a message to the citizens that there will be no tolerance for violent protests either way.

FERGUSON Mo. (Reuters) - Missouri's governor declared a state of emergency on Monday and authorized the state's National Guard to support police in case of violence after a grand jury decides whether to indict a white police officer who fatally shot an unarmed black teenager.
"As part of our ongoing efforts to plan and be prepared for any contingency, it is necessary to have these resources in place in advance of any announcement of the grand jury’s decision," Governor Jay Nixon said in a statement. The order also puts the St. Louis County Police Department, rather than police in Ferguson, Missouri, in charge of policing protests.


Like I said the other day, the gloves are off and the game is on.

Judging from what I have seen in the recent past, I am predicting bloodshed this time.
Posted by Phil at 1:19 PM No comments:

What Are Tyrants Really Afraid Of? 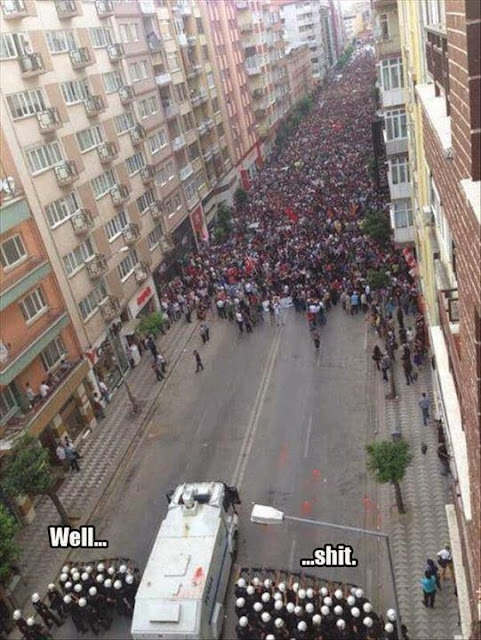 The American people have no idea how badly outnumbered the forces of evil really are in this country.

Those evil people do though and it keeps them awake at night.

Image shamelessly borrowed from Battlefield USA, if you aren't visiting that site daily, you should be.
Posted by Phil at 9:42 PM No comments: